Van Halen was the band that kicked off my lifelong passion for rock music; this was the first band I stumbled across in this genre, but decidedly not the last. One cursory listen to “Eruption” and I was hooked for life. And like most people who experience a life-changing moment, I can remember exactly where I was when the airwaves hit my ears, exploding into my consciousness, the lightning screech of the notes forever burning into my brain.

Released on Van Halen’s 1978 self-titled debut album, “The whole album only took a couple of weeks [to produce],” bassist Michael Anthony is quoted as saying. “[Producer] Ted Templeman wanted to make a big, powerful guitar record, and he had all he needed in what Eddie was doing.” Playing his signature Frankenstrat – a copy of the highly modified Fender Stratocaster is now at home in the Smithsonian Institute National Museum of American History – Eddie Van Halen’s instrumental track is widely considered by rock enthusiasts as one of the greatest guitar solos of rock and roll. One of the reasons for this is a technique he popularized here called tapping, which Van Halen did with both hands as a signature style.

And why should Eddie Van Halen’s taste in watches be a whole lot different than that? Turns out it wasn’t.

With the news of Van Halen’s untimely passing on October 6, 2020 and with our resident spotter Nick Gould’s help, here we list three times Van Halen showed that his watch taste was at least as good as his skill in writing and performing guitar solos.

This Van Halen group portrait from 1995 shows Eddie clearly sporting a classic Reverso by Jaeger-LeCoultre, probably with a solid case back. From all the photos I scouted, he seems to wear this watch the most.

In 1985 Eddie Van Halen was inducted into the inaugural Hollywood Guitar Center Rock Walk. The Guitar Center Rock Walk is a pedestrian path located at the entrance of Guitar Center’s flagship store on Sunset Boulevard in Los Angeles. The event honors musicians and musical pioneers making a significant creative contribution to the evolution of music through their talent and/or creative ingenuity.

Going with an oversized blazer and t-shirt à la Miami Vice-era Don Johnson – a popular fashion at the time – Van Halen wore a Coin Watch by Corum on his wrist, showing his exquisite taste in trendy, yet lasting, elements. Though the particular model he wore is more than likely quartz powered, that can’t be held against him as 1985 was still the throes of the quartz crisis. 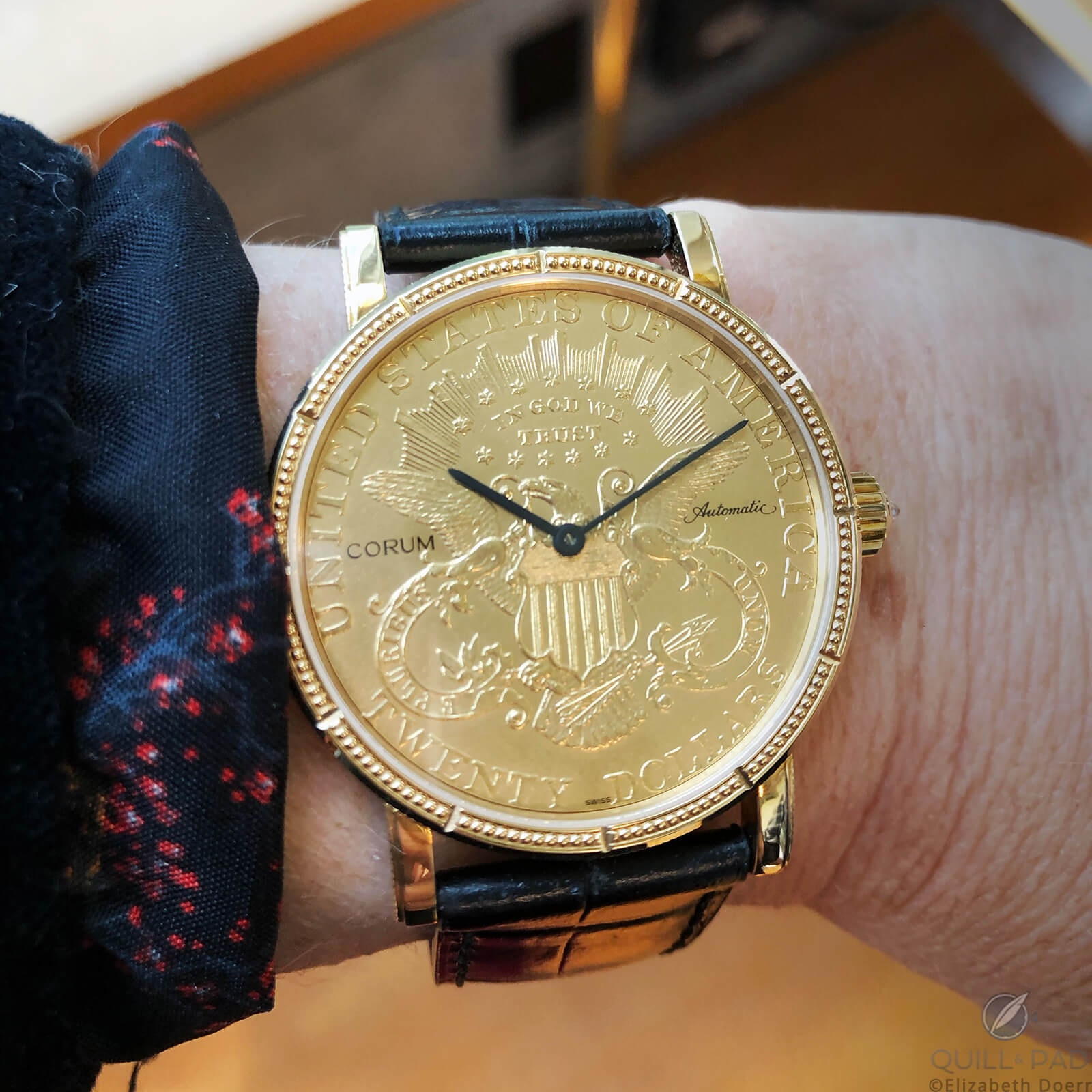 The choice of the Corum 20 Dollar Coin Watch is nothing short of extraordinary. For reference, this yellow gold watch was just 34 mm in diameter and thin as a wisp!

For more on the event, check out this fan site.

Following a 22-year split beginning in 1985 when Roth left the band and was replaced by Sammy Hagar, this was a pretty big announcement to say the least. The entire lineup wasn’t completely original, though, as bassist Michael Anthony was replaced by Eddie’s 16-year-old son Wolfgang on that tour. This watch is still in the Bell & Ross collection, for more on it see www.bellross.com/our-collections/vintage/br-v1/br-123/br-123-original-black.

And to come back to “Eruption” – in case you are unfamiliar, first shame on you, and second go listen to the 1:42 minutes of mind-blowing, life-altering guitar work that provided an unforgettable soundtrack to many people’s formative years – including mine. Eddie Van Halen will be sorely missed.