In 1993, the Musée International d’Horlogerie in La Chaux-de-Fonds (MIH) created the Prix Gaïa to honor the memory of one of the earliest patrons of the museum, Maurice Ditisheim. If the Grand Prix d’Horlogerie de Genève awards the horological Oscars, then the more cerebral Prix Gaïa might be considered the horological Nobel Prize. In 2019, the Prix Gaïa added something new in the form of an incentive grant called the Horizon Gaïa, which aims to encourage new talent in the fields of craftsmanship/creation, history/research, and entrepreneurship.

The grant funded by the Watch Academy Foundation is awarded to an individual project, which must be completed within one year. The first recipient was Aude Moutoussamy, a young woman with a masters degree in contemporary history from the Sorbonne, who used the grant to undertake six months’ worth of research on the social media strategies of several watch brands in Switzerland and abroad.

This year, the grant goes to Zoé Snijders, who is pursuing a masters degree in conservation/restoration of technical, scientific, and watchmaking instruments at the Haute École Arc in Neuchâtel. Snijders will study the origin, symbolism, and operation of the Delvart astronomical clock with the aim of making it more accessible, understandable, and visible to museum visitors. This clock sporting 23 indications, acquired by the MIH in 2015, is one of the most complicated in history.

The 2020 Prix Gaïa for Entrepreneurship went to Urwerk founders Felix Baumgartner and Martin Frei for “the pioneering role their company has played in defining twenty-first century watchmaking: bold, yet rigorous and humble, the product of ongoing dialogue and unwavering loyalty between the designer and watchmaker.” Watchmaker Baumgartner and designer Frei – who fortuitously met at a new year’s party in 1995 – founded Urwerk in 1997 when Baumgartner was just 22. Before that, Baumgartner spent a year and a half doing restoration work for other watchmakers and helping large, well-known, and very traditional companies solve tricky mechanical problems on new movements. Even at that tender age, the watch world seemed to understand what a pivotal figure Baumgartner in combination with Frei, the far-seeing designer, had the promise of becoming.

In 1997 Urwerk exhibited at its first Basel Fair with the A.H.C.I. (Académie Horlogère des Créateurs Indépendents/Horological Academy of Independent Creators), the UR-101 and UR-102 models in tow, whose displays resemble a wandering jump hour.

Today Urwerk is known for its the revolving satellite display of hours and minutes, which eliminates the need for hands – hands that would not suit the elongated cases of Urwerk’s contemporarily styled timepieces. The revolving satellites launched in 2005 with the UR-103 collection. For small brand, Urwerk is quite geographically distributed around Switzerland with administration and watchmaking in French-speaking Geneva, research and development in Swiss German-speaking Buchs, Frei living in Zurich, and Baumgartner in Zug. Urwerk has managed to stand out from the crowd with more than just its futuristic designs and inventive yet practical mechanics. “Normally, when you create a brand that is headquartered in Geneva, you give it a beautiful, luxurious French name,” Baumgartner has joked to me about the sterile melody of his brand’s moniker. “We just do our thing.”

Urwerk always goes against the flow. And this is exemplified perfectly by the boutique brand’s name, an artificial word that is a play on the German word Uhrwerk (watch or clock movement). Ur refers to the ancient Sumerian city of Ur (now southern Iraq) where thousands of years ago the concept of 60 seconds in a minute and 60 minutes in a hour was developed. But it is also a German prefix meaning “very, very old” or “original.” Werk means “work,” and can refer to a “(watch) movement,” “creation,” or “oeuvre.”

This award to the duo is long overdue. Baumgartner and Frei took a chance on something totally original and it paid off – largely due to their belief in what they were doing and a solid plan that they stuck to without worrying about flavors of the moment, setting trends, or not following them. Over the decades, Baumgartner and Frei have remained unwaveringly true to the ideals and goals they set out to accomplish. And for that alone they deserve this accolade.

Independent watchmaker Antoine Preziuso has been honored “for his systematic approach to mechanical watchmaking in his exceptional creations, his perseverance in developing his brand, and his dedication to sharing his passion.” Preziuso can look back on a long and prosperous career as an independent watchmaker. He is a Geneva-born maker of Italian descent whose father was also a watchmaker (which makes his son, Florian, who works with him, the third generation of Preziuso watchmakers). Graduating in 1974 from the Geneva Watchmaking School at the top of his class, he was recruited by Patek Philippe.

In 1980 Preziuso set up Antiquorum’s first restoration and appraisal workshop; in 1981, at the age of just 24, he founded his own atelier. It was then that he joined the Cabinôtiers de Genève, a predecessor to the A.H.C.I., which was founded by A.H.C.I. co-founder Svend Andersen. Preziuso both worked on developments for major watch companies and his own unique timepieces before launching his own brand in 1990. He first exhibited at Baselworld as a candidate member of the A.H.C.I. in 1995, becoming a full member in 1996. 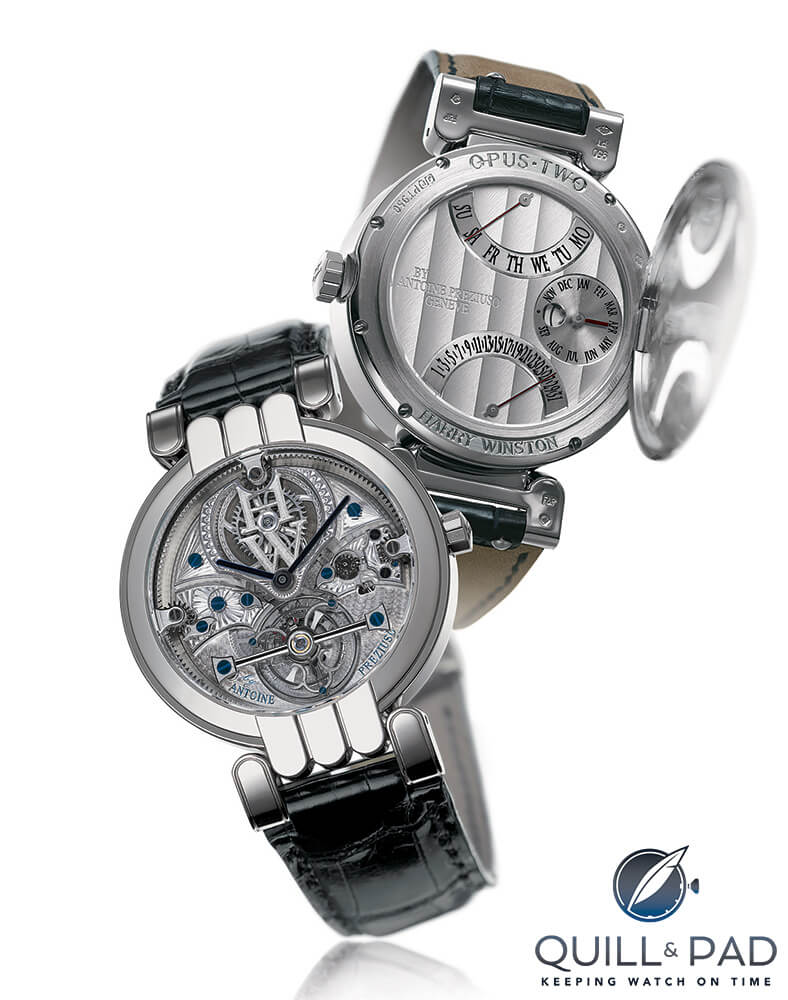 The Opus 2 by Antoine Preziuso for Harry Winston

Preziuso’s visibility among a wider watch collecting public was heightened when in in 2002 he created the Opus 2, the second Harry Winston Opus for the Harry Winston Rare Timepiece division headed up by then-CEO Maximilian Büsser. Today, Preziuso’s business is a tight-knit family affair.

The 2020 Prix Gaïa was awarded to Denis Savoie “for his exceptional career as a theorist, historian, and builder of sundials, combining the greatest scientific rigor with his outstanding work to popularize this area.” One of the books Savoie has written is Sundials, a tome that explains in detail how these early timekeepers are built and how they work. It is written for every level of knowledge as one of the book’s express goals is to enable readers to make their own. New MIH Gaïa Series I Watch: Surprising In Its Use Of Brutalist Design