If I may start with a touch of advice, not specifically relevant to today’s topic. Never move house. Ever! I do not care where you are or what you live in. Never move.

For months I have been going through this nightmare and am only halfway done. Finally sold my beloved house on the creek. Since then, I have been “squatting” in a beach shack (yes, there are worse things in the world) while looking for more enduring digs – very disruptive and I dread going through it all again when I have to try and find a more permanent bolthole. I could regale you with endless stories of the bank losing the documents – not once but twice – floods, COVID-19 interruptions, eight extensions to the settlement, and on and on. But the bottom line? Just don’t move.

Why is that relevant? Because it all meant that I missed the latest in the irregular mates’ lunches that provide such pleasure and many decent bottles. And this one hurt: the theme was 2005 Grand Cru Burgundy. Oh, the injustice (of course, some may see this as a first-world problem, and fair enough). It got worse. One of the bottles was the legendary 2005 Domaine Armand Rousseau Chambertin. What a wine! I must confess that it was only a few months ago when I last tasted it, but still.

This miserable situation was, of course, the very thing of which Alexandre Dumas was thinking when he said, “Life is a chaplet of little miseries, which the philosopher counts with a smile. Be philosophers, as I am, gentlemen; sit down at the table and let us drink. Nothing makes the future look so bright as surveying it through a glass of Chambertin.” Sadly . . .

I’ve tasted a number of Chambertins from Rousseau over the years and they are always scintillating. The 2005 is from one of the great Burgundy vintages. When tasted recently, it was balanced, plush, complex, and with such incredible length. A glorious Burgundy and one of the wines that so thrills those looking for that extra level. A supple, seductive texture, an array of fruits, forest floor notes, cassis, coffee grinds over warm, wet earth.

Stunning now, it has many years ahead of it. For me, it was 98, and even that felt a bit stingy. The village of Gevrey-Chambertin in Burgundy

Chambertin: a great name in wine

Chambertin is one of the truly great names in the world of wine. It is part of Gevrey-Chambertin, the village comprising 315 hectares. This appellation was created in 1937.

The range of vineyards throughout the region, different makers and various vintages all provide variations on the theme, but in general these wines tend to the fuller, firmer style of Burgundy, which is possibly why it has been suggested that it is known as the “king of wines” and not “the queen.” These are wines that can age magnificently.

Grand Cru vineyards sit up the slope, usually somewhere between 250 and 300 meters. This continues on outside Gevrey, of course. There are nine different Grand Crus in Gevrey, though the lines can blur.

In his essential book Inside Burgundy, Jasper Morris queries whether every Grand Cru vineyard here is worthy of the name. He is not alone in that. Mazoyères-Chambertin and Chapelle-Chambertin are two usually noted as struggling to maintain the high standards achieved by the best.

Chambertin-Clos de Bèze ranks behind only Chambertin itself. On the other hand, the Premier Cru, Clos Saint-Jacques, is generally considered to have been very unlucky to miss Grand Cru status, and its wines often attract prices that exceed those for some of the “lesser” Grand Crus. Some say it missed out on the status of Grand Cru for political reasons; others say it was because the vineyards are not contiguous with Chambertin itself. Whatever the reason, never miss an opportunity to try this wonderful wine.

The status and respect that Chambertin attracts is highlighted in being the only Grand Cru in Gevrey able to use its name in isolation. The other eight must all be hyphenated to Chambertin. In addition to those mentioned, the others are Griotte-Chambertin, Charmes-Chambertin, Latricières-Chambertin, Mazis-Chambertin, and Ruchottes-Chambertin.

In typical Burgundian/French fashion, it is never as simple as all that. Vineyard owners with holdings in the Clos de Bèze Grand Cru are entitled to label those wines as simply Chambertin though, as Morris notes, it rarely happens. None of the other Grand Crus of Chambertin are permitted to do this.

Burgundy is the prime example of how minor differences in terroir create unique wines. Clos de Bèze is on a slope that is slightly steeper than that of the vineyards of Chambertin, while Chambertin experiences cooler breezes. Clos de Bèze also has a greater percentage of small stones in its topsoil than does Chambertin. The 12.9 hectares of Chambertin have around two dozen owners – Domaine Armand Rousseau has the largest share with 2.15 hectares (the price of that piece of land would likely more than rival that of a city block in London or New York). Bernard Dugat-Py and Dujac both hold a mere 0.05 hectares each. Some of the important names with vineyard holdings here are Leroy, Bertagna, Ponsot, and Denis Mortet.

Sadly, the price for a bottle of Chambertin from a top producer will likely exceed AUD$1,000, and sometimes several times that.

It wasn’t always so. I remember picking up several bottles of the 1972 (a much-underrated vintage in Burgundy) Rousseau Chambertin for AUD$40 a bottle at auction (that seems like Fantasyland today, of course). And this was many years after the vintage itself (unfortunately, I was not buying Burgundy in primary school).

I remember my first encounter with the wines of Denis Mortet, of which I am now a huge fan. A friend was celebrating a birth in the family, and a few of us gathered to do the occasion justice. One brought along a bottle of the 1996 Denis Mortet Chambertin. Blew me away, so much so that I still remember how silky and yet powerful and complex it was.

Not long after, I saw that very wine offered in magnum at an auction. At the same auction, bottles of First Growth Bordeaux – not magnums, but still superb wines – were going for far more than the magnum of Mortet. Sadly, they were all out of my range but I could never understand the discrepancy.

Today, of course, the great Burgundies have long left top Bordeaux behind in price stakes. Perhaps that will change again, though I won’t hold my breath. 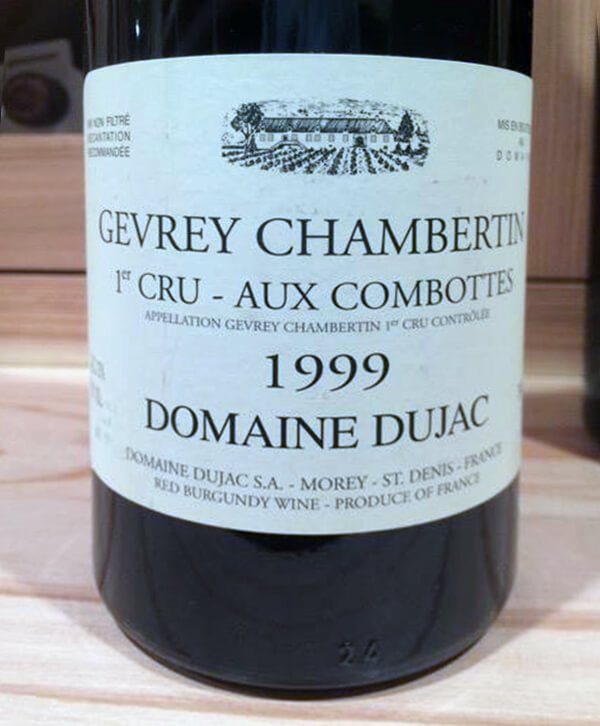 Chambertin has a long history. The vineyards, originally fields, were once owned by a Monsieur Bertin, hence the origins of the name, “Champ de Bertin,” meaning “Bertin’s field.” It is believed that Monsieur Bertin was the first to plant grapes here. The earliest reference to wine comes in the thirteenth century, in 1276, when Guillaume de Grancey exchanged vines in Champ de Bertin with the Abbey of Cluny.

In his book, Morris provides some fascinating details of critics, including some fictional, and their thoughts on Chambertin. He quotes, for example, Charles Ryder from Brideshead Revisited and the pleasure he takes from bottles of Chambertin-Clos de Bèze.

But perhaps even more interesting is the contrary view from the man many consider the very first wine critic, George Saintsbury in his Notes on a Cellar-Book, in which he details that he has made no mention of owning any Chambertin. “The fact is that it has never been a favorite of mine. It may be blasphemous to call it coarse, but it seems to me that it does something grow to coarseness . . . ” On this the good professor and I would disagree, although there is one point on which we are as one – it is indeed blasphemous to call Chambertin “coarse.”

Perhaps Chambertin’s most famous fan was Napoleon. It is said that he insisted on a suitable supply being available during his military campaigns, consuming it daily from bottles embossed with a special N and refusing to drink any other wine during his reign. Less impressively, he insisted that it be diluted with water (he can go and sit in the same naughty corner as Professor Saintsbury). Napoleon was quoted as saying that, “Nothing makes the future look so rosy as to contemplate it through a glass of Chambertin.” Perhaps he stopped diluting it the evening before Waterloo.

Chambertin has also given us one of the most famous “wine quotes” of all, one that has been attributed to many, including Napoleon, but it seems to have originally come from Hilaire Belloc (remember, as Thomas Jefferson said, “The problem with quotes found on the internet is that many of them are not true”).