Elegance in men’s watches was nearly killed in the late 1990s when steel became the new gold and wearing anything with a diameter below 44 mm would raise serious doubts about one’s manhood.

Fortunately, even times like those are not forever. While major fashion brands today make an absolute fortune selling tracksuits plastered with their logos, it is balanced by a revival of classic tailoring.

With a finely tailored outfit details matter, and an equally refined timepiece is a must. While there are fortunately still a few brands who carry such watches in their current collections, these times have also opened the door for many vintage watches. And among these, the exquisite Piaget Reference 908 must be considered. 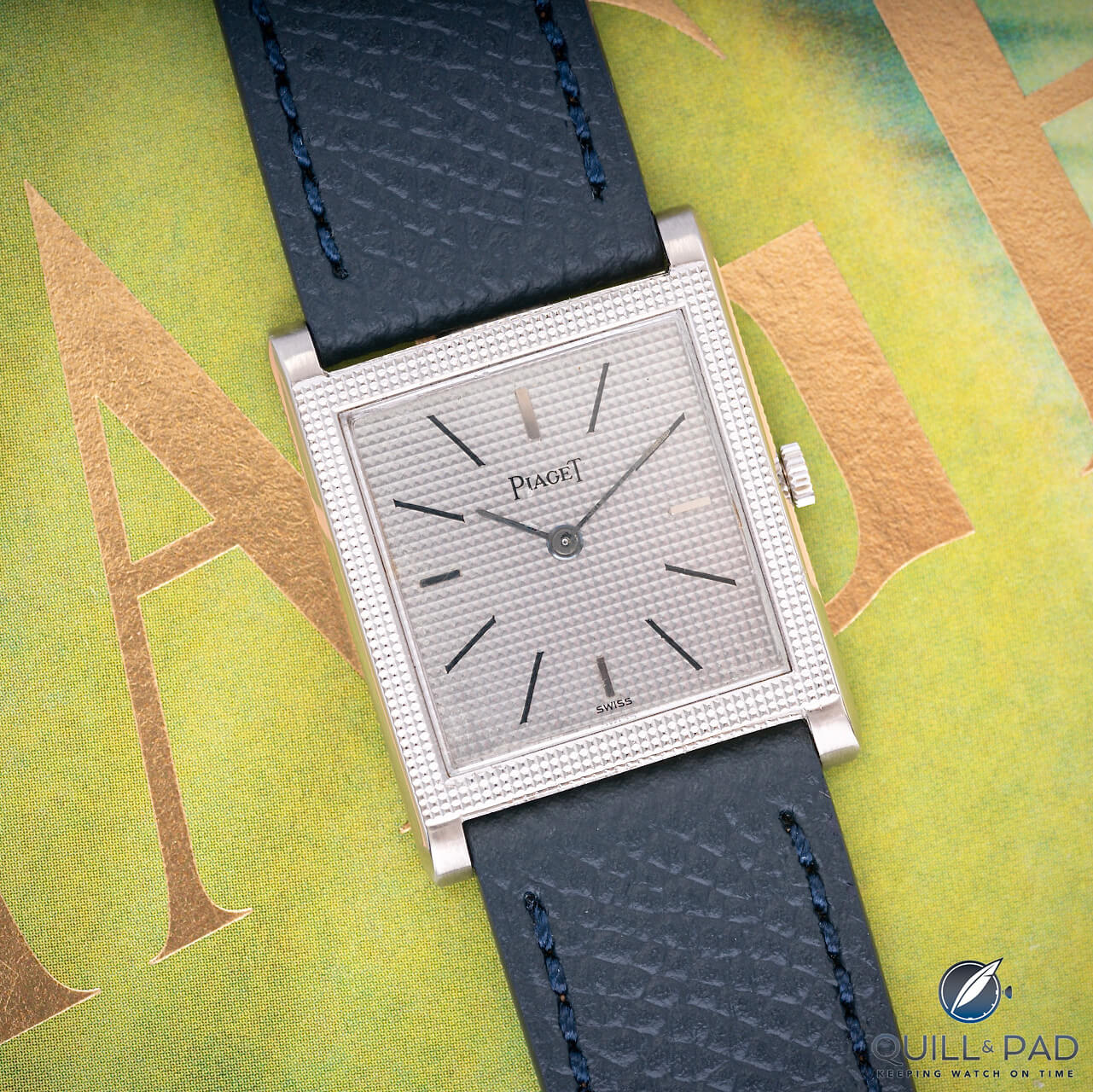 Reference 908 was an essential model for Piaget in the 1970s. The tank-shaped case was so versatile that it could accommodate a wide variety of different styles, ranging from very classic with a polished yellow gold case and matching dial with printed Roman numerals and leaf hands to more extravagant versions featuring stone dials, diamonds, and multiple golds.

This Piaget – Reference 908 C4 to be exact – is neither the former nor the latter, but it does do an excellent job at highlighting clous de Paris, a decorating technique made using a guilloche machine consisting of tiny symmetrical pyramids. On Piaget Reference 908 C4, the white gold case, bezel, and dial are all decorated with hand applied clous de Paris guilloche, which is also known as hobnail in English. The clous de Paris engravings give the watch a masculine appearance, yet at the same time a generous dash of elegance. That is the true power of clous de Paris and the reason why it played an indispensable role in the Piaget collection of the early 1950s up until the 1980s.

While other brands have also used clous de Paris – notably Patek Philippe on its Calatrava bezels – it is still rare to see a watch that so extensively features the decorative technique. As Piaget has vast experience as a jeweler, and at the time only used precious metal for its watch cases, it knows how to use such techniques without making them seem like overkill.

The bezel frames the dial with three rows of clous de Paris but the lugs have a brushed finish, creating the impression that the watch is square. The sides also feature clous de Paris, but Piaget applied slight anglage with a polished finish where they connect to the bezel. This adds a halo-like reflection, which reminds me of Simon Templar played by Roger Moore in the television series The Saint, a gentleman who would certainly have appreciated this watch. While Piaget could have left it at that, the brand took it a step further by engraving the miniature pyramids into the dial as well. This creates a unique visual effect that is all the more apparent because the brand opted to keep the hour markers and hands as sober and unadorned as possible.

Eight of the hour markers are pad-printed stripes, perfectly matching the equally straightforward design of the hands. The 12, 3, 6, and 9 o’clock hours are marked by gold baton-shaped markers, adding a differentiated look that gives the dial more depth and makes it so much more captivating without taking away from almost industrial overall look.

A simple but effective crown further underscores this. 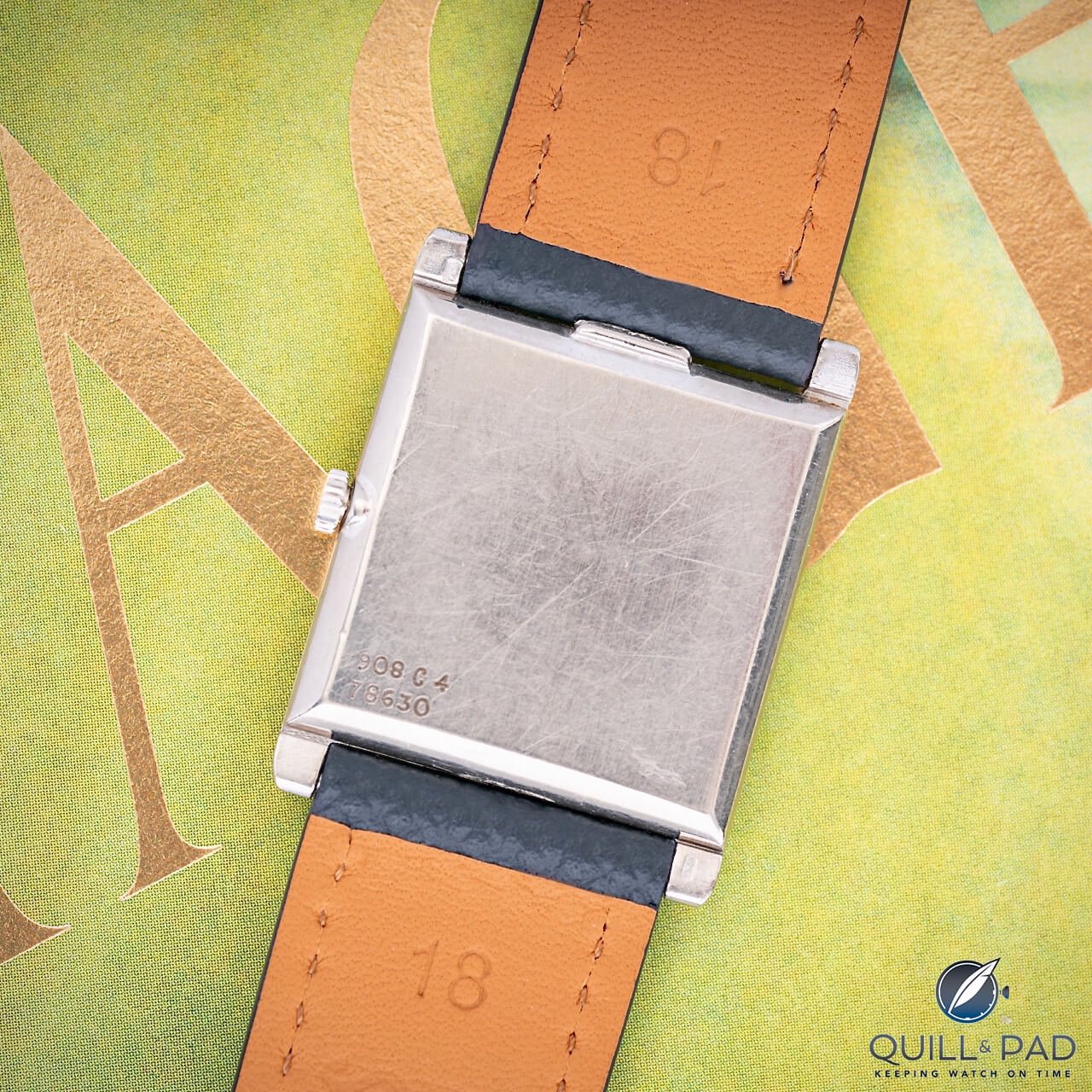 While closed case backs were still the norm in the 1970s, this Piaget is powered by what I consider one of the best and most historically significant manually wound movements ever created: Caliber 9P.

When this movement was introduced at the Basel Fair in 1957, some visitors thought that Piaget was playing a trick on them and that the watches on display were props. Nothing could have been further from the truth as the two millimeter-high movement was not only fully functional, it also proved to be robust, something not all ultra-thin movements have going for them. Caliber 9P was finely decorated with côtes de Genève, a circular-grained main plate, and chamfered bridges. While Piaget most certainly enjoyed the deserved attention that this record-breaking movement gave the brand, that was never the sole purpose of it.

Another important reason to create such a thin movement was the creative freedom it gave designers as the dimensions of the movement became less of a concern.

With Reference 908 4C, Piaget’s designers didn’t showcase the thinness of the movement but instead used it to create an elegant watch with perfect proportions. While its size might look intimidatingly small to the modern man at first, opinions are certainly bound to change once it is strapped to the wrist.

This is a watch that doesn’t take over the wrist but complements it. It teaches us that masculine elegance is a unique style that somehow gets smashed between the wheels of trends and fashion but is too stubborn to leave altogether.

Instead, it converts men who appreciate vintage timepieces like this Piaget into instant ambassadors. The best thing is that they no one even has to utter a word for all of this to happen: seeing somebody wear watches like this is often just the spark any connoisseur needs to get a fire started. While this Piaget is a natural match with a well-cut suit, the experience and feeling generated while wearing it might go beyond.

The white gold splendor of Reference 908 4C makes it very easy to match with a wide variety of different-colored straps. While black and dark blue bring out the watch’s classic side, it also goes surprisingly well with (bright) green, taupe, and, for the daring, red or yellow. This versatility allows anyone to enjoy the vintage refinement that this Piaget offers, even with more casual clothing.

Watch and images courtesy of www.watchworkshaarlem.com.