Trailing decades behind women – see The First Wristwatches From Breguet, Hermès And Patek Philippe Were Made . . . For Women – it wasn’t until 1904 that one of the first wristwatches for men would be made.

It was dandy aviator Alberto Santos-Dumont who talked his friend, Louis Cartier, into making a wrist-borne watch for him so it would be easier to see the time while flying. But it wasn’t until World War I that humankind – with the emphasis on “man” – would fully embrace the wristwatch. But the first examples were already in existence. The Cartier Santos became available to the public in 1911 and was only a modest success.

It is hard to imagine now, but the model always remained somewhat in the shadows, especially compared to the far more popular Tank watches that Cartier would develop later. But the Santos’s claim to fame lay in the making when in the 1970s under Robert Hocq Cartier evolved from three boutiques to a luxury brand with worldwide reach. To accomplish that it needed a star, and that star became in 1978 the Santos model: redesigned and fitted with a bracelet, the watch was completely aligned with then-current trends as the world boogied into the 1980s.

This timepiece became an incredible success and played a significant role in establishing Cartier as one of the predominant luxury brands of today.

In 1987 Cartier felt that it was time to refresh it and rounded some of the sharp edges off the 1978 model. The result was called the Santos Galbée, which had a more fluid design reminiscent of the original Santos of 1904 while retaining the powerful image established by the 1978 model. Building bridges with the Santos

With the new Santos, Cartier builds bridges to both the past and the future and does so using clever design.

In appearance, the 2018 Santos de Cartier takes many cues from the Santos Galbée. The major difference is, however, the bezel, which now covers the entire case down to where the bracelet or strap begins. This is also a major difference between this watch and its predecessors, as previously the choice was often either strap or bracelet (but not both).

With the new Santos for 2018, Cartier cleverly brings in both straps and bracelets – and not for you to choose from, but rather for you to switch between. Both the straps and the bracelet are fitted with a quick-release system, allowing owners to swap around in a matter of seconds. That switch is quite dramatic, as the watch on a strap clearly shows that it shares its DNA with the watch that was on the wrist of Alberto Santos-Dumont in 1904.

Especially if you opt for one of the new calfskin straps, you’ll notice that the Santos gets a bit of a vintage feel going. This is also the configuration in which the redesigned bezel shows its strength, visually uniting case and strap.

This is, unfortunately, less so with the bracelet attached; the original bezel was better at achieving a smooth transition between case and bracelet. Nevertheless, it is easy to fall in love with this bracelet as it not only has a quick-release function, but you can even size it yourself without tools. Cartier refers to this new functionality as the “SmartLink self-fitting technology,” which means that by pressing on a particular spot inside a bracelet link, a pin releases that you can pull out with your nails/fingers.

While this may seem like overkill, as many people get their watches sized when they purchase them, the Santos bracelet doesn’t have a fine-adjustment system, so some might need to add or take out links with the change of seasons.

Many watch brands are getting smarter with the sizes it is making available. As I already explained in Sensible Case Sizing: How The 2018 SIHH Showed Us We Are Heading Back To The New Normal, fewer sizes not only optimize production processes, but also make it easier for customers to make decisions.

That is why Cartier offers the new Santos in medium (35.1 x 41.9 mm) and large (39.8 x 47.5 mm) sizes, both powered by Cartier’s manufacture Caliber 1847 MC even though the medium-sized version comes without the date function that this movement supports.

With these two sizes, I believe that Cartier offers a satisfying choice to about 80 percent of potential clients. Given the predicates “medium” and “large,” I expect that Cartier is considering adding a smaller Santos later to the collection to capitalize fully on the very important female demographic.

An extra-large addition is something I don’t expect as the market for this type of watch is not as strong as it once was. 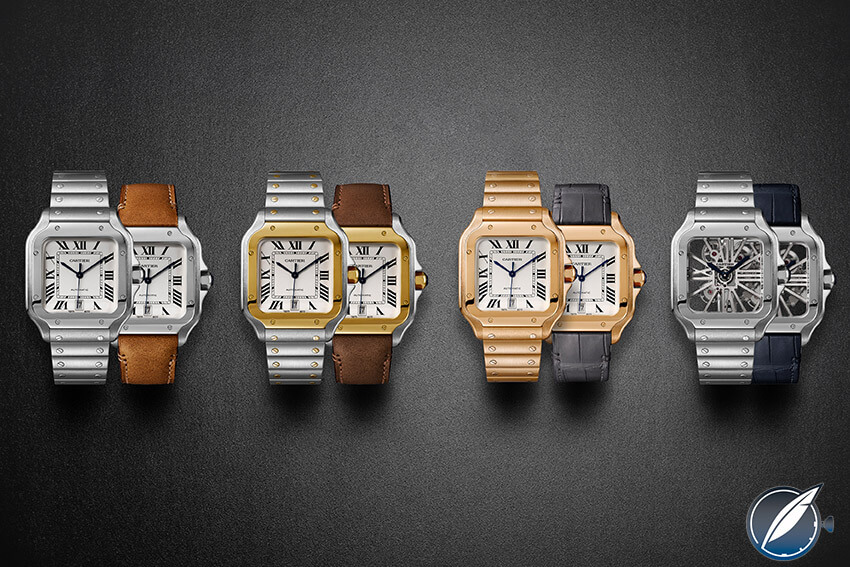 Still, Santos lovers will have plenty to choose from as Cartier offers the watch in steel, steel/gold, and either full yellow gold or pink gold with bracelet or strap, all fitted with the patent-pending QuickSwitch system.

Regarding straps, Cartier is immediately launching a large variety of styles and colors – a clever move as this will allow consumers a wide range to choose from and the ability to match the Santos easily to personal preferences. And customers will come back if and when they want additional straps.

Due to the QuickSwitch system only original straps will fit these watches, and therefore Cartier has extended its revenue stream beyond the initial purchase with something other than maintenance.

The new Santos didn’t come totally unexpected as Cartier had begun slowly retiring pretty much the entire existing Santos collection over the course of the last couple of years. And it celebrates an anniversary: 40 years ago this year the Santos blasted into the watch world’s consciousness.

The only surprise, perhaps, was that Cartier also introduced a skeleton version of it right away! Santos de Cartier on the wrist

The Santos de Cartier is back and with a vengeance. With prices starting at $6,250 for the medium-sized version on a strap, it will be a strong competitor – as befits its status.