When Confusion Paves The Way To Awe: The Ludovic Ballouard Upside Down

Sometimes the world we live in goes all topsy-turvy. If you’ve been watching the news lately…well to be honest, if you have ever watched the news you might find yourself wondering what the heck is going on with “this” group or “that” country, or maybe even your boneheaded local representative.

The world can be very confusing. But confusion is a tricky concept, with a medical definition to match. Acute mental confusion, often interchanged with delirium or disorientation, is the pathological state in which one experiences a loss of orientation and/or memory. It can sometimes be accompanied by a loss of linear thinking with consciousness, meaning that one does not understand where he or she is in time, location, personal identity, or even recall recent events.

This is a serious condition that can result from a reaction to medication, a sudden brain dysfunction or injury, or be the onset of dementia.

And, yet, not everyone who experiences confusion is suffering from dementia or a brain injury. Many times, mild confusion can result from a sudden or subtle shift in expectations, which fail to match an observed event.

An example might be when you see your friend get off an airplane, run to greet him or her, and suddenly you reach for an absolute stranger and are bewildered by the fact it is not your friend. You become disoriented and unsure about what you just saw, and in my own case, more than a little embarrassed for mistaking a stranger for a friend.

How does this happen?

What happens to make you confused is that your brain registers an event: seeing your friend disembark, then upon approaching said friend, he or she “turns into” the person they were the whole time. Your brain struggles to comprehend where the error occurred. In this case, your friend could have disembarked directly next to the other person, and you saw the other person’s clothes and your friend’s face: your brain made a connection, and when you approached the “friend” in the grey jacket the error was uncovered, but the “why” is missing.

Until that “why” is filled in, nagging feelings of disorientation, confusion, and possibly fear or anger at being fooled prevail. Once the “why” is discovered (your friend was walking just behind the other person and their bodies lined up), you will then be able to fill in the mental gap and the feelings of confusion will disappear, possibly followed by embarrassment or even amusement. This is the more common occurrence of confusion, one that many of us will feel daily at some point. Even a small thing such as “knowing” that you put your sandwich next to the yogurt in the fridge and not two shelves down and underneath the apple slices where you have found it can cause momentary confusion.

I find that during busy work times, when I have tools strewn about and am changing them every ten seconds, there will undoubtedly be a moment where a screwdriver completely and utterly disappears only to reappear a minute later sitting on top of a hammer, or more likely under the hammer. That minute will see me in total confusion about what happened to that screwdriver, with the imagined scenarios becoming increasingly unlikely until the moment you spot the “lost” tool.

Personally, I have become aware that if I am taking in a lot of information or am concentrating very intently on a task, the risk of possible confusion increases as my observance of the world around me diminishes. But this still does not reduce the shock and disorientation when something surprisingly confuses you for no reason.

For this reason, it should come as no surprise that when I first saw the Ludovic Ballouard Upside Down I had a moment of total confusion. I didn’t even know what was confusing me, I just felt like something was wrong.

And then I noticed it: all the numbers were upside down. 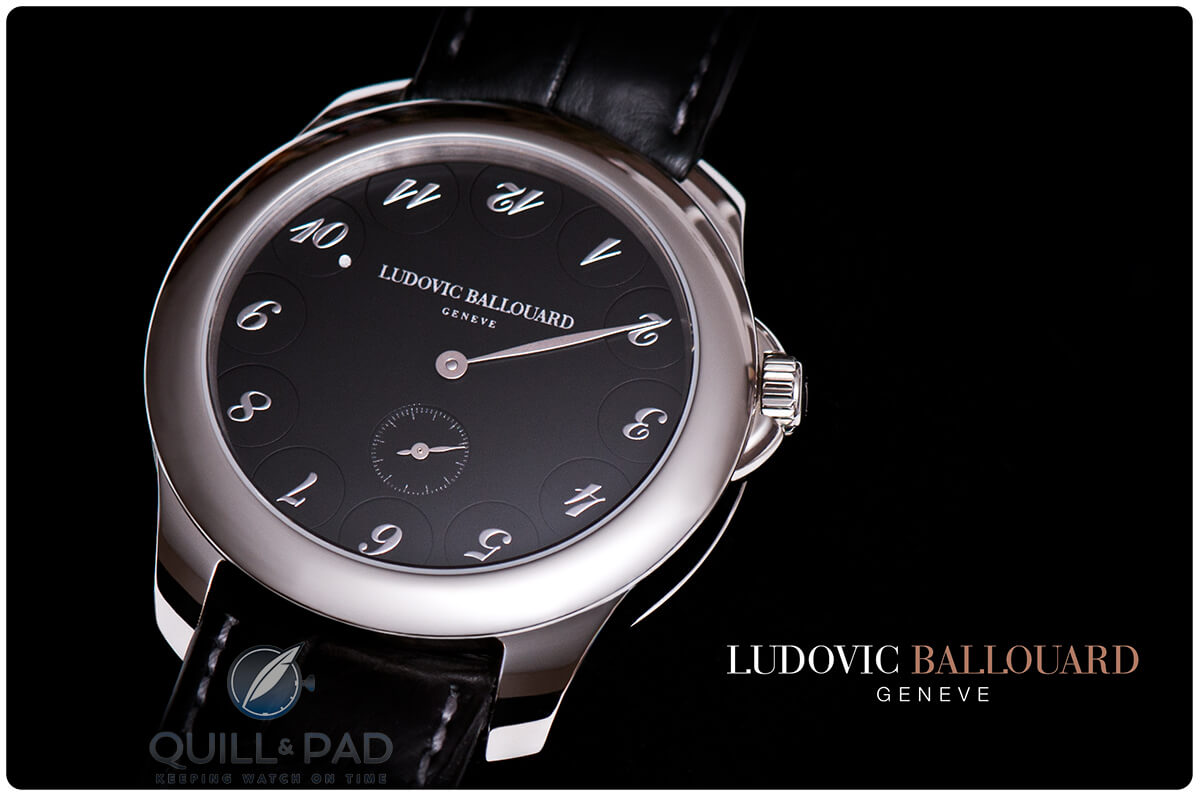 The Ludovic Ballouard Upside Down in platinum

I was still confused, but I had a lead. It took me at least another half-minute before I realized that there was one number the right way up, and then the confusion gave way to awe. I started to understand what was so special about this piece, and why it looked so normal and yet so odd to begin with.

The Ludovic Ballouard Upside Down is a jump hour watch where the hours are – you guessed it – upside down except for the current hour. The only other indication of the current hour is a small dot on that hour disc to aid in finding it. Each hour disc’s edge is set slightly outside of the visible dial so as to hide this dot when the disc is rotated into its “waiting” position.

It’s a very elegant and mischievous design, but an even more interesting mechanism. And, as we all know, that is why I come to the party. Built from the shadows of a Peseux 7001, the majority of the movement is developed in-house and it is spectaculawesome.

Let’s break down how it works, because I simply love the clever design of the mechanism. The back of a Ludovic Ballouard Upside Down movement being assembled

It all starts with the minute wheel, which has a snail cam attached on the rear of the movement. By the way, this is where all the real action takes place. Riding on this snail cam is a lever with an off-center pivot. Attached to the long end of the lever is a second lever that is sprung to keep pressure against an outside ring. This ring has 24 teeth cut into it, some full ratchet teeth and others more of a divot to catch the pointer on a second spring. That spring keeps this outside ring in place when not in action. Now, as that all happens, an entire outer dance gets underway. You see, that ring has advancement teeth on the outside, most likely four, as you will see why shortly. These teeth mesh with a series of twelve Geneva-style wheels, also known as Maltese cross gears, which are tied to the numerals on the dial. Each of these Geneva wheels has four slots, which means that four advancement teeth are required to rotate the numerals 360 degrees.

As the outside ring rotates at the top of the hour, two teeth mesh with two consecutive Geneva wheels, advancing each 180 degrees. This allows for the flip of two numbers in a row, one to right side up, and the current one back to upside down.

As the hours pass, two numerals at a time are activated by the four teeth on the ring moving around the watch catching all the Geneva wheels two by two.

Upside down, inside out

And it’s superb. So superb that I would love to request an edition that can be worn with the movement facing up, sapphire discs attached to the Geneva wheels so I could see the entire show at work through the transparent numerals. Please, Mr. Ballouard, I humbly ask you to consider my request, as well as the additional request that you forward on a prototype for my hands-on assessment and testing purposes. I had the great opportunity to meet Ludovic Ballouard at Baselworld and handle the latest iteration of the Upside Down with mother-of-pearl marquetry, and it was incredible. This is a limited edition of twelve pieces in red gold, though the version I saw happened to be housed in a platinum case (might be a one of a kind!).

I have to say that after seeing that piece only in pictures from across the interwebs for years, getting to handle the real thing was a treat for the senses and for my inner mechanism nerd.

The Upside Down by Ludovic Ballouard is the ultimate sleeper watch, confusing to those unfamiliar with its fantastic movement, and seriously lusted after by those who know the secret. I am glad that I had the awkward moment of confusion when I first saw the piece, because it makes the appreciation of it that much more special.

• Wowza Factor * 8.0 It is a big sleeper watch, something that brings wows only after the initial confusion disappears. And then it’s a big wow.

• Late Night Lust Appeal * 94.87 gn » 930.356m/s2 Almost the force of a sprint missile under acceleration, this piece definitely keeps you lusting deep into the morning hours.

• M.G.R. * 68.99 Extremely strong geek rating for this movement, completely and deservedly so. I mean, Ludovic Ballouard trained with F.P. Journe and Franck Muller, so the pedigree is incredible.

• Added-Functionitis * N/A Again, like so many incredible watches, this one does nothing else but tell you the time. Technically. It performs a lot of tricks, yes, but doesn’t tell you anything more, so for this category is still skates by with no Gotta-HAVE-That cream, even though I definitely want to have that anyway.

• Ouch Outline * 12.55 – Having Your Foot Squashed By A Bus Now, if this happens to you, it may just be your fault. That said, it would be excruciating! With that also said, I would take it for a chance to wear the Upside Down indefinitely.

• Mermaid Moment * Oh, whoa… I get it. Wow! When that confusion subsides and the reality is clear, you will fall in love with this watch. If you don’t, you may just be a permanent bachelor because this piece rocks. I’d order the invitations if I were you.