Few brands can equal the international globe-spanning success of Louis Vuitton; it seems that everything that the brand makes turns to gold.

Perhaps one of the secrets of the Louis Vuitton’s success is the focus on quality, and this is evident in the brand’s watches. With such a strong brand name, wristwatches have the potential of becoming one of the marque’s cash cows. And as long as these are mainstream (read affordable) enough while continuing to display sufficient Louis Vuitton “DNA,” there is nothing wrong with that.

Yet that is not what Louis Vuitton has done. In fact, it went down the completely opposite route, taking a quite artistic approach to its timekeepers. This is an approach that Gaston-Louis Vuitton, who was fascinated by design and a leading collector of vintage hotel labels (one of my favorite books in my personal library is World Tour: Vintage Hotel Labels from the collection of Gaston-Louis Vuitton by Francisca Matteoli), would have most certainly appreciated. This started with the Monterey I and II models (more about those in the near future) and continues with watches like the extraordinary Escale Spin Time Black & Fire, Louis Vuitton’s contribution to Only Watch 2017.

This intro has probably already made clear to some extent that I am an avid enthusiast of Louis Vuitton watches. With its collaboration with and subsequent takeover of La Fabrique du Temps (see Louis Vuitton’s Journey To Watch Nirvana (Or Meyrin)), the brand creates watches that go so much deeper than just telling time and prominently displaying the logo. 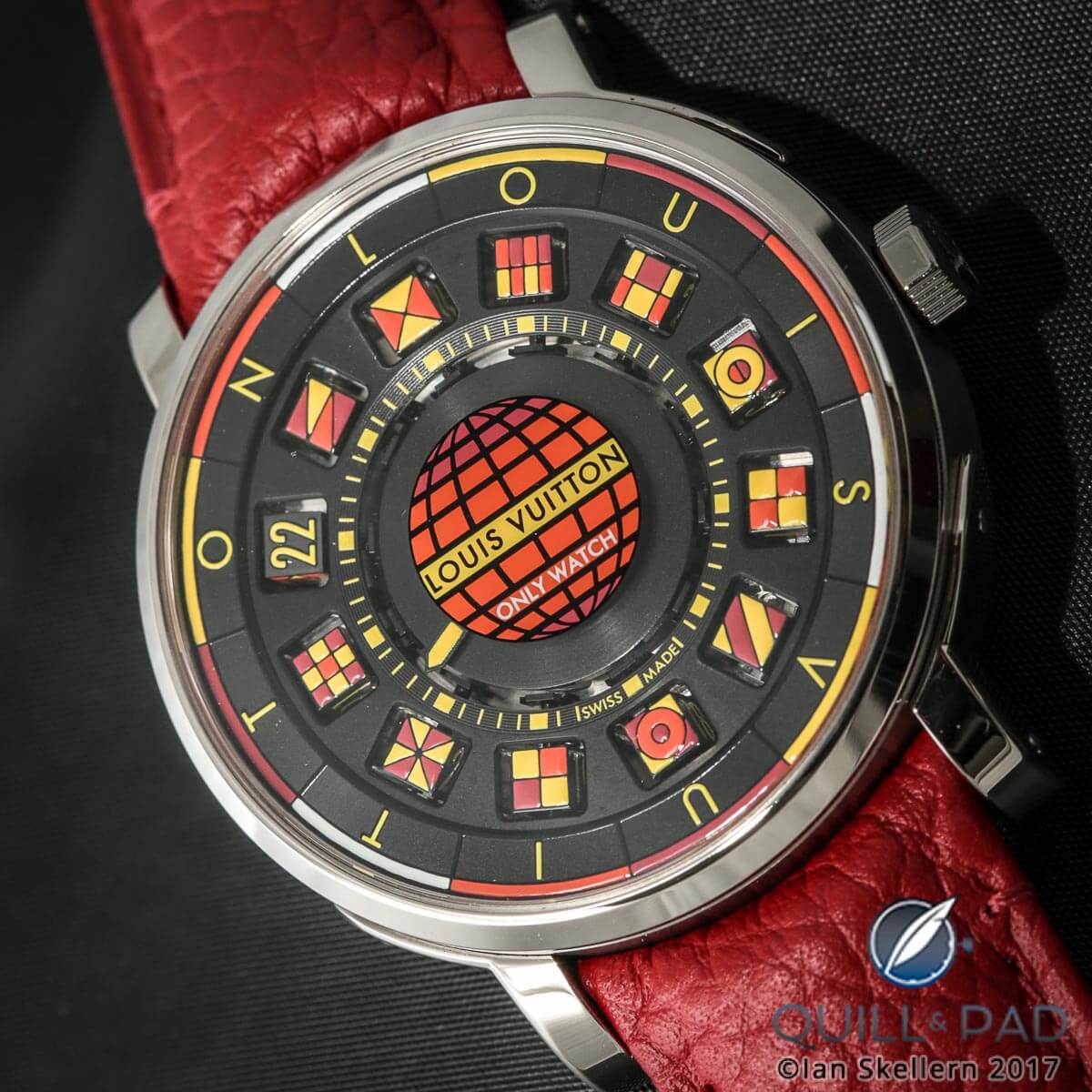 Take for example the Spin Time, which this watch is based on and which displays the hour in a very creative way. Twelve cubes on the dial show nautical flag designs – except one, which displays the current hour. This cube will turn to its own nautical flag when the hour passes, and another will come around to show the next hour. The minutes are displayed by a central hand coming out from behind the warm-colored globe.

The result is a watch that is easy to read, has its own distinct character, and is – well – fun. Louis Vuitton’s own design style becomes evident when you look, for example, at the way the white gold lugs are attached to the Spin Time Black & Fire’s titanium case, much in the same way as the metal is attached to Louis Vuitton trunks.

The “Black & Fire” color scheme works wonders, making the watch even more expressive than the regular model already is. Each of the four sides of the cubes is decorated by hand using the pad printing method, while the watch is powered by automatic Caliber LV 77, which Louis Vuitton developed in its Geneva workshop. Whoever issues the winning bid will not only receive this unique Escale Spin Time Black & Fire, but also a trunk to house the watch in, which can be personalized by the owner. To make the experience truly unique, he or she will also be invited to visit the brand’s historic workshop in Asnières as well as to enjoy a lunch at the Louis Vuitton family house in the company of La Fabrique du Temps co-founder (and now head watchmaker at Louis Vuitton’s facility) Michel Navas and Hamdi Chatti, vice-president at Louis Vuitton in charge of the watch and jewelry division. Brands donate unique timepieces that are auctioned. The proceeds are used completely to help finance research against Duchenne muscular dystrophy, a debilitating and life-threatening genetic disorder affecting around one in 3,500 boys including Pettavino’s own son, who died of the disease in November 2016. For the 2017 edition, 49 brands have donated timepieces.