Enthusiast (noun): “A person filled with enthusiasm: such as one who is ardently attached to a cause, object, or pursuit.”

Whenever people talk about their passions, they often describe themselves as enthusiasts, passionately devoted to some particular activity, idea, or object. There comes a general understanding enthusiasts might become extremely excited if they begin talking about said passions.

Their specialist topics truly fill the minds and bodies of enthusiasts with adrenaline, keeps them up at night scouring books or websites for tidbits of information, and leads to conversations that at some point invariably turn into a way for them to talk about their passions. Romain Gauthier Insight Micro-Rotor: the independent boutique brand finally came out with an automatic at Baselworld 2017

Enthusiasts are different from connoisseurs, who may wax poetically about a topic, extolling its virtues and making proclamations about the best of the best but in a more subdued manner.

So while connoisseurs may value similar things as enthusiasts, they have a reputation of being more placid and deliberate, keeping their passions in check rather than letting them take over their emotions.

But enthusiasts are akin to fans (a word which is short for fanatics, to provide context), people who aren’t afraid to emote to anyone and everyone about their passions.

In the world of watches, enthusiasts can also be connoisseurs, but when wearing the hat of the enthusiast they take on a role much more expressive than the stereotype of the stoic collector and connoisseur of haute horology.

The enthusiast is just that: enthusiastic – and most likely this personality trait bleeds into other areas of life. There are similar cars used for very different purposes because enthusiasts tend not to have passive relationships with the things they love. Enthusiasts want to act, desiring to use their watches to fulfill their passions instead of replacing them. I believe it follows for many, if not most, watch enthusiasts that an automatic movement is what is desired on the wrist. Connoisseurs, as I wrote previously in Here’s Why: Manual Winding Watches Are For Horological Connoisseurs, want to connect with their watches, desiring an object to behold and cherish for its beauty, rarity, or complexity.

Now I will preface this all by saying that I agree that enthusiasts can be connoisseurs and vice versa, but I’d like to argue that they each represent two different types of behavior and two very different goals for the watches they love. Of course it’s very likely that enthusiasts might have a couple exquisite examples of haute horology that only come out for special events. But the other watches they own probably aren’t safe queens; they are accessories for a lifestyle that is probably more active than not.

Enthusiasts tend to have multiple passions, and those passions can be rather varied and sometimes very adventurous. Automotive racing, mountain climbing, deep sea diving, flying: you name the activity and it is very likely that a watch enthusiast engages in one or more. And when they do those activities, they aren’t taking off their watches in fear of them getting scratched or bumped around. No, they wear their watches as tools and accessories to augment their experiences with their other passions. As such, they don’t tend to use watches that are overly delicate or need a lot of coddling to ensure they are working. Many, but certainly not all, high-end manual wind watches fall into that category as they can be very finely finished and feature little protection against an active lifestyle. Oftentimes they will be encased in precious metals that are easily scratched or feature little to no real water resistance. These watches might have complications that can be easily damaged with rough use or have decorative dials that aren’t very legible when participating in a fast-paced activity.

As I alluded to in my previous piece about manual wind watches (see Here’s Why: Manual Winding Watches Are For Horological Connoisseurs), many early automatic watches weren’t even intended to be collector pieces; rather they were being made as wearable equipment, objects that served a functional purpose instead of a coveted talisman. They were tools.

Designs of watches often focused on legibility and usefulness, and automatic winding was the best thing to come along since the invention of the Swiss lever escapement.

While there have always been exquisite horological masterpieces, the vast majority of watches ever produced have been practical time-telling devices for the average person, and the average person tends to just want something that works – perhaps even with as little interaction as possible because, as was becoming the norm, making things “automatic” meant you were living in the future (which some think is a good thing).

Why wind your watch when just moving around will do it for you? That sentiment was extremely prevalent in the middle part of the twentieth century, so much so that the invention of the quartz watch with its extreme accuracy and multi-year battery life nearly killed the entire mechanical watch industry.

Automatics for the “everyman”

As the industry regrouped and was reborn 20 to 30 years ago, two different strategies had emerged for watch companies focusing either on elite horology or quality craftsmanship and practicality. Most of the entry-level watches focused on usability, and due to that a large segment of the market focused on tool-oriented timepieces largely sporting now-reliable automatic movements. The absolute best example is Rolex.

Disregarding marketing or nostalgia, Rolex is one of the most practical mechanical watch purchases you can ever make. The brand’s watches have been slowly and deliberately engineered over decades to be extremely reliable, robust, and capable.

And “capable” not in the sense that it can show you the zodiac, sunrise and sunset, or chime the time in three different ways, but capable in that you should never need to hesitate about using the watch for its intended purpose, which is to simply tell the time whenever needed.

Automatic movements became the competitor to quartz because they can be reasonably accurate, and, more importantly, never need a battery change (I know what you are thinking: recommended service intervals, but that is beside the point).

Building upon that, many quartz watches didn’t do too well in extreme environments until well into the 1980s, and since they were being made more and more inexpensively, they began to lose ground as the “choice” solution and instead became the cheap solution for personal timekeeping.

A solid automatic watch was becoming a standard piece of kit for anyone that wanted good, reliable timekeeping in a variety of environments and in a form factor that didn’t make them look like a 14-year-old on a paper route. Adventurers, explorers, extreme athletes . . . many choose a high-quality automatic wristwatch for its durability, reliability, and, not surprisingly, its lineage. Pilots would get an IWC or a Breitling; divers would get an Omega or Blancpain; racecar drivers would get a TAG Heuer or Zenith. Or all of these might get different Rolexes. There are many brands that can be considered the go-to watch for specific activities, and pretty much each one will typically feature an automatic movement for different practical reasons.

There are always exceptions to the rule, but when it comes to watches worn by enthusiasts, automatics just make a lot of sense.

The usefulness of automatic movements is hard to argue with when consistency is your main goal. It provides a certain level of assurance that the watch should continue functioning for the foreseeable future. Enthusiasts value that assurance because, in some cases, their lives may depend on it.

Extreme explorers want as many assurances as they can get, so even in the age of digital everything, they may still have analogue watches, gauges, and old-school technology in case the high-tech stuff fails.

Just because you want something to be beautiful, rare, and complicated doesn’t mean it needs to lose practicality. Plus, some people have the means to wear something horologically (and monetarily) incredible on a daily basis, and sometimes they want it to just work. Adding a linear rotor to the Golden Bridge Automatic’s movement

Many high-end watches now include automatic winding mechanisms in a variety of formats to expand on the already fantastic options for haute horology. From the likes of Romain Gauthier, Richard Mille, Hermès, Agenhor, Laurent Ferrier, Vacheron Constantin, Corum, Carl F. Bucherer, Roger Dubuis, Patek Philippe, and more we find peripheral rotors, dial-side rotors, micro rotors, and sliding linear weights; all of these solutions can be added in ways that don’t hamper the view of the movement like the standard center pivoting rotor, and in some cases become something even more interesting to see. 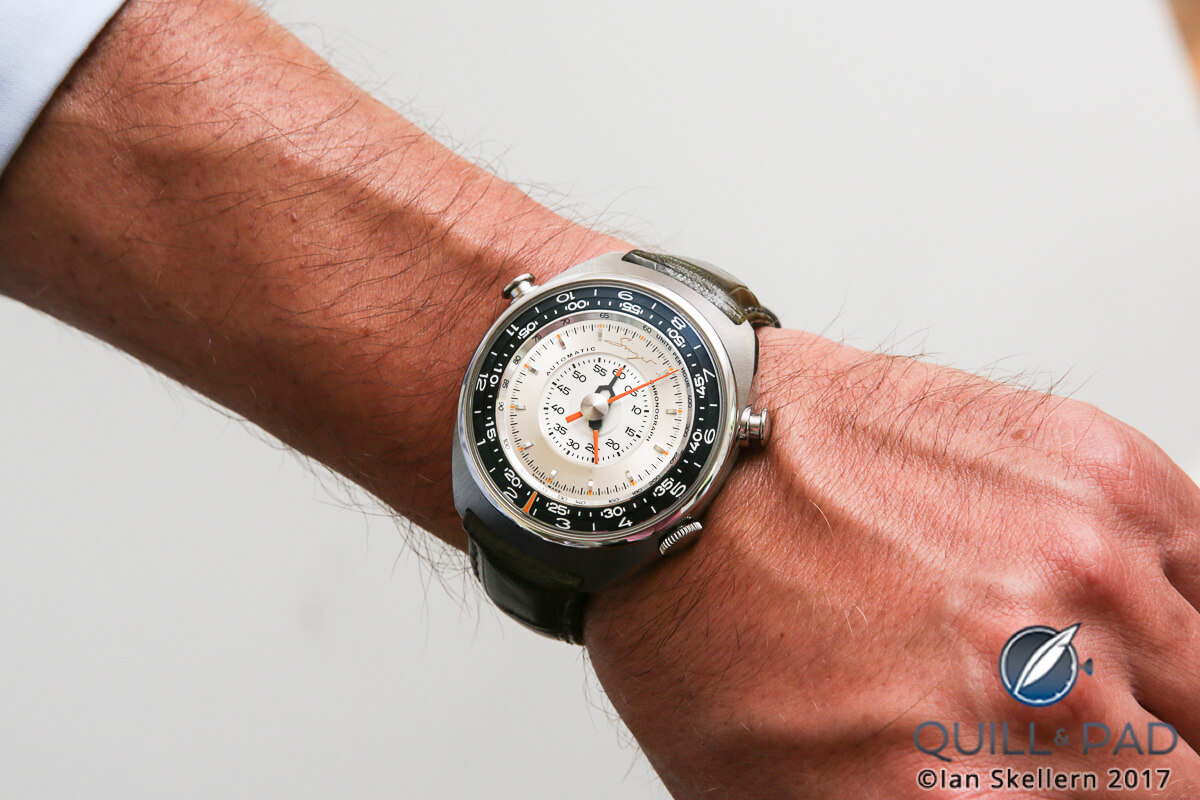 This variety of automatic winding options allows for exquisite decoration, ingenious complexity, and a more practical and user-friendly experience that all enthusiasts love. In this way, an enthusiast can have some top-tier pieces without losing practicality, and connoisseurs can have practicality without sacrificing beauty and high-end horology. It really is a win-win situation. There will always be a desire to have purely classic horology featuring mechanisms that would be familiar to Abraham-Louis Breguet or Ferdinand Adolph Lange, as there should be. But enthusiasts know that a watch that can keep up with their exploits is a valuable commodity indeed.

There can be no consensus on which is better, manual or automatic winding, because they both serve a specific purpose in the modern watch world. But it is certain that while manual winding movements sing of tradition and provenance, automatically wound movements are the true enthusiast option. Caliber 3500, visible through the display back of the Vacheron Constantin Harmony Ultra-Thin Grande Complication Chronograph with its half-circle of the gold peripheral rotor clearly visible

So where do you find yourself in this picture? More manual than automatic, automatic all the way, or a nice smattering of both? It doesn’t really matter, as we are all WIS with a devotion to watches and watchmaking that borders on comedic. But to me, one thing is definitely certain: if I am ever lost on an adventure, I know that it’ll be an automatic on my wrist (and hopefully a satellite phone in my pack). How about you?

Happy collecting everyone, and don’t forget to be awesome!

You may also enjoy the article that to which this one is a counterpoint: Here’s Why: Manual Winding Watches Are For Horological Connoisseurs.